It was just a nice relaxing night in Naples that saw two players sent off, Juventus hanging on for dear life and the Serie A title race being put out of reach even more than before.

If you thought that Juventus’ trip to Naples would be relaxing for the simple fact of there being a 13-point difference between first and second place, you were hardly mistaken.

A game that didn’t have the kind of hype it has gotten in previous years because of the great distance in the standings between the two clubs didn’t exactly resemble it.

It was a long and winding road that took us to Juventus’ 2-1 win over Napoli at the Stadio San Paolo on Sunday night, a result that saw the seven-time Scudetto winners extend their lead atop the Serie A table to a whopping 16 points even before the first weekend of March is officially a thing of the past. And while a handful of Juve’s wins have been routine and straightforward, this one was the exact opposite of that.

Juventus built a 2-0 first-half lead through a brilliant Miralem Pjanic free kick and a wide-open header from Emre Can immediately after Napoli went down a man after goalkeeper Alex Meret was sent off in the 25th minute.

That had a lot of us thinking that Juve were going to stroll to another three points, right? Or at least find a way to put Napoli away in the second half, maybe?

Pjanic got sent off what seemed like 30 seconds into the second half and that officially marked the point in the game where Juve would rarely even test Meret’s replacement, David Ospina, on the other end of the field. Napoli didn’t just take control of the game, they pinned Juventus back in their own half for virtually the entire second half. Juve were scrambling, trying to do anything possible to not completely throw away a two-goal lead like they did a few weeks back against Parma.

It was probably a lot more stressful than you thought a Juventus game with a 13-point lead could be. But, because this is Juventus, the logical and normal way of thinking should probably just be thrown out the window. We should know better by now, shouldn’t we? (For shame!)

This was a day of firsts, too, though.

OK, so maybe the last couple of bullets are sense with a bit of a facetious tone, but the fact still remains that this game was, at least from an entertainment value standpoint, offered a whole lot more than what Juventus had been offering up the last couple of times they had taken the field.

So now as we look at the Serie A standings and see that there’s a SIXTEEN-POINT LEAD between Juventus and Napoli, is it safe to say we can call the Scudetto race over? Like, even more than we were in the days before this game kicked off?

Juventus dominated Napoli at the Allianz Stadium earlier this season, then took their best shot at the San Paolo despite the fact that Napoli played a good chunk of the game down a man.

This was one of those nights where the best and worst of Juventus showed itself over the span of 90 minutes. (Or 96 minutes in this case.)

I don’t really know where we stand in terms of the “Can this lead to Juventus actually finding itself before the second leg against Atlético Madrid?” narrative we’ve been discussing for the past week and a half. But hey, at least that wasn’t boring like the last time Juventus played away from home on a Sunday, so there’s that. 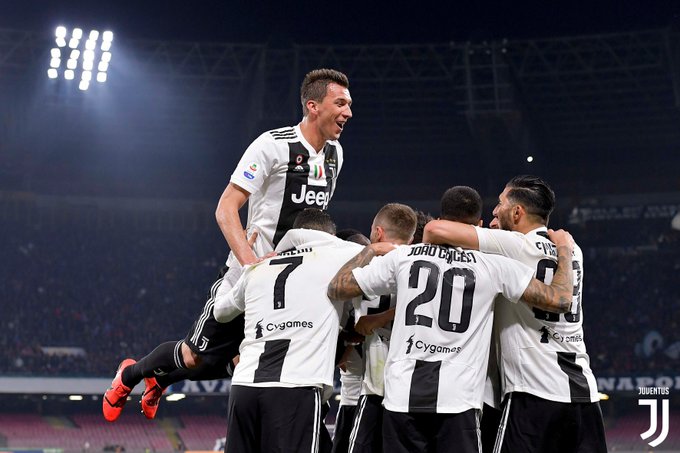